You Are Here: Home → Food → Good and Bad Salt 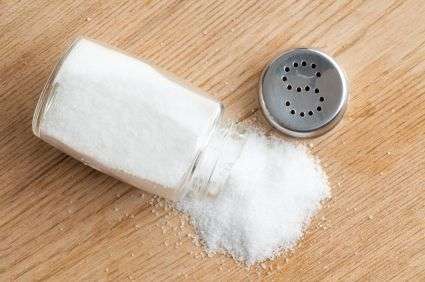 How much salt are you REALLY eating each day? A recent study by the Centers for Disease Control (CDC) indicates that we are getting a majority of our salt content from common foods even before we add that little extra from the salt shaker. In fact, over 44% of our daily food intake is made up of these foods. Are you increasing your chances of heart disease and hypertension?

The amount of sodium can dramatically vary from product to product. Some companies use salt as a preserving agent, some use it to promote the flavor, and still others use it to cultivate your appetite. Before you put it into your mouth, take a look at the nutritional information on the back of the container to find out how much sodium that you’re ingesting.

How much sodium do you need in a day?

Our bodies are comprised of around 1% salt, and we need 500 mg per day to survive. That salt that we ingest helps with muscle function as well as transmitting signals from our brain through the nerves. The extra salt, ingested through foods and through the iodized salt that we put on the table, is excreted through our pores and processed through our kidneys. When the levels of sodium are too high, our bodies store it in our veins, creating an excess of plaque and other hypertensive concerns.

The Institute of Medicine recommends:

The average salt intake for people above the age of 2 is 3,436 mg. This is twice the recommended daily amount, and over 1,100 mg over the recommended upper limit of 2,300 mg per day. According to Thomas Freiden, director of the CDC, “Heart disease and stroke alone kill more than 800,000 Americans each year and contribute an estimated 273 billion dollars a year in health care costs. Reducing the sodium content of the ten leading sodium sources by just 25% would lower total dietary sodium by more than 10% and prevent an estimated 28,000 deaths per year.”

Since our bodies need a certain amount of salt to survive, where can we find salt that is not as harmful as the table salt which we are ingesting?

Look to the natural salts like Himalayan sea salts, pink salt, or black salt. The table salt that we ingest has been processed, bleached, and sterilized to flow better and look better. This salt has been heated to over 1200 degrees and refined to the point where it is merely sodium and chloride. The natural salts which have not been processed also contain trace elements which promote good health and well being.

Sea salts are more flavorful than regular table salt. The impurities within the sea salt give it varying flavors depending on its origin. While the sea salts are generally more expensive in the grocery store, they can also add subtleties to your eating experience.

When considering your family’s food choices, put down the salt shaker and consider spicing your foods with other flavors.  Chances are, the food that you’re eating has enough sodium in it to receive the recommended daily allowance. Try putting aside the salt shaker for a day and experimenting. Your body will thank you for it.

7 ‘Most Addictive Foods’ to Avoid for a Healthier Life

Fat has, for years, been depicted as a big evil when it comes to our diet. It has been shown to cause obesity, heart diseases, as well as high cholesterol. However, there have been recent scientific studies that show that people should consume more fat since it does have many […]

Coconut Water, “Natures Energy Drink” is becoming quite a popular health drink that we see more and more people experimenting with. Celebrities too are becoming quite accepting of this new drink, as well as supporting to its multimillion dollar industry now. Coconut water, found in an immature green coconut is […]

Copyright © 2022
Information provided on this website is for general purposes only. It is not intended to take the place of advice from your practitioner. All trademarks and registered trademarks appearing on this website are the property of their respective owners and prescriptionpoint.com is not affiliated with them in any way.